I’m excited to let you know that new Viking historical fiction novel, Raven’s Feast, the sequel to God’s Hammer and the second book in Hakon’s Saga, has launched and is available in print and ebook formats. Amazon is the best place to get your copy, though other retailers will be carrying the print version soon. 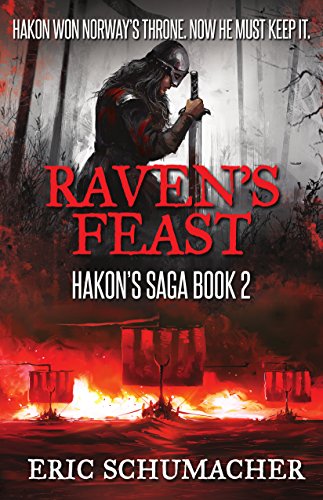 Raven’s Feast is the true story of Hakon Haraldsson and his quest to win and keep the High Seat of Viking Age Norway.

It is 935 AD and Hakon Haraldsson has just wrested the High Seat of the North from his ruthless brother, Erik Bloodaxe. Now, he must fight to keep it.

The land-hungry Danes are pressing from the south to test Hakon before he can solidify his rule. In the east, the Uplanders are making their own plans to seize the throne. It does not help that Hakon is committed to his dream of Christianizing his people – a dream his countrymen do not share and will fight to resist.

As his enemies move in and his realm begins to crumble, Hakon and his band of oath-sworn warriors must make a stand in Raven’s Feast, the riveting sequel to God’s Hammer.

“At its core, Raven’s Feast is more than a story about a young king holding firm to the power he has won in Viking Norway,” said Eric Schumacher, author of Raven’s Feast. “It is the story of a young man holding true to one’s self and convictions in the face of extreme challenges — something to which, I hope, many people can relate.”

Pick up your copy today!

To celebrate the launch, the prequel, God’s Hammer, will be available free-of-charge on Amazon in the US, UK and CANADA from May 2-6, 2017.