The person of interest in today’s post is Grand Prince Sviatoslav (Sviatoslav I Igorevich), ruler of the Rus kingdom (Kievan Rus’) from AD 945-972. He is a fascinating figure who features largely in my novel, Sigurd’s Swords. He is courageous and aggressive. A warrior’s leader. But did he overstep his limitations and pay the price for his boldness?

Grand Prince Sviatoslav is the son of Igor and Olga of Kiev and the grandson of one of Kievan Rus’s founding fathers, Rurik. Little is known of his upbringing save that he was tutored by a “Varangian” (a Scandinavian warrior). Modern researchers believe that the name Sviatoslav is a translation of the Old Norse name, Sveinald or Sveneld. Sviatoslav’s father, Igor, was killed by the East Slavic tribe known as the Drevlians around AD 945 while collecting tribute from them. His mother, Olga, avenged her husband in the most gruesome fashion, then ruled as regent in Kiev (Old Norse: Kønugarðr) until Sviatoslav reached adulthood (ca. AD 963).

With most characters, I try to glean what I can from historical texts, but in Grand Prince Sviatoslav’s case, he is described in detail by a contemporary, Leo the Deacon, who attended a meeting between Sviatoslav and John I Tzimiskes outside the walls of Drastar, an old Roman fortress on the Danube. According to Leo, Sviatoslav was a bright-eyed man of average height but of stalwart build, with a bald head and a wispy beard, a thick mustache and a sidelock to show his nobility. He preferred to dress in white, and wore a single large gold earring bearing a carbuncle and two pearls.

According to the Primary Chronicle, he carried neither wagons nor kettles on his expeditions, and he ate strips of horseflesh, game, or beef by roasting it on coals and hot rocks. He spurned the use of a tent, preferring to sleep on a blanket with a saddle under his head.

As a ruler, Grand Prince Sviatoslav did not seem to have the patience for administration. He preferred the company of his warriors and spent much of his life in warfare expanding his wealth and his kingdom.

His greatest success was the conquest of Khazaria, which for centuries had been one of the strongest states in the region. It is believed Sviatoslav had an interest in removing the Khazar hold on the Volga trade route because the Khazars collected duties from the goods transported via that river. Sviatoslav destroyed the Khazar city of Sarkel around AD 965, then subsequently sacked the Khazar capital of Atil. The destruction of Khazar imperial power paved the way for Kievan Rus’ to dominate north-south trade routes through the steppe and across the Black Sea, routes that formerly had been a major source of revenue for the Khazars.

In AD 967 or 968, the Byzantine Emperor Nikephoros persuaded Sviatoslav to assist the Byzantines in a war against Bulgaria. After paying Sviatoslav 15,000 pounds of gold, the grand prince set sail with an army of 60,000 men, including thousands of Pecheneg mercenaries. Sviatoslav defeated the Bulgarian ruler Boris II and proceeded to occupy the whole of northern Bulgaria. Wary of growing Rus power, the Byzantines then bribed the Pechenegs to attack and besiege Kiev, where Olga stayed with Sviatoslav’s three sons.

Enter Olaf Tryggvason, the main subject of my second series. Nothing is known of Olaf Tryggvason at this time except that he may have been in Kievan Rus’. It is plausible therefore that he could have been at the Seige of Kiev. Be that as it may, one of Sviatoslav’s generals rescued the besieged city, and Sviatoslav refused to relinquish his grip on northern Bulgaria. His relationship with the Byzantines subsequently crumbled.

GET STORIES LIKE THIS DELIVERED TO YOUR INBOX. CHECK HERE.

Confident in his growing power and kingdom, Grand Prince Sviatoslav marched into Bulgaria again in AD 969 or 970. Before he left, he divided his kingdom into three parts, each under the rule of one of his sons. His youngest son, Vladimir, was given Novgorod and the northern area around it.

At the head of a massive army that included Pecheneg and Magyar auxiliary troops, Sviatoslav invaded Bulgaria and then marched (perhaps foolishly?) on Constantinople. The Byzantines retaliated in force, driving the Rus back over the mountains at Adrianople and defeating them again in the Battle of Arcadiopolis. The Rus retreated to the old Roman fort and town, Dorostolon (Old Bulgarian: Drastar), where the Byzantines (supported by angry Bulgarians) besieged them for 65 days. After a final defeat at a battle outside of Dorostolon’s walls, Sviatoslav took the remainder of his beleaguered army and sailed back to Kievan Rus’.

The Death of Sviatoslav

It is believed that the grand prince met his end en route to Kiev, the victim of a Pecheneg ambush alongside the Dnieper rapids. Legend tells us that the Pecheneg Khan Kurya had been paid by the Byzantine’s to kill Sviatoslav and that the khan, having successfully concluded his gory business, had Sviatoslav’s skull made into a drinking cup. And so ends the tale of this arrogant, eccentric, brave, foolhardy prince of the Rus.I hope you enjoyed this post. As always, please leave any comments below. If you would like to see how I fictionalized Sviatoslav’s character, please check out Sigurd’s Swords. 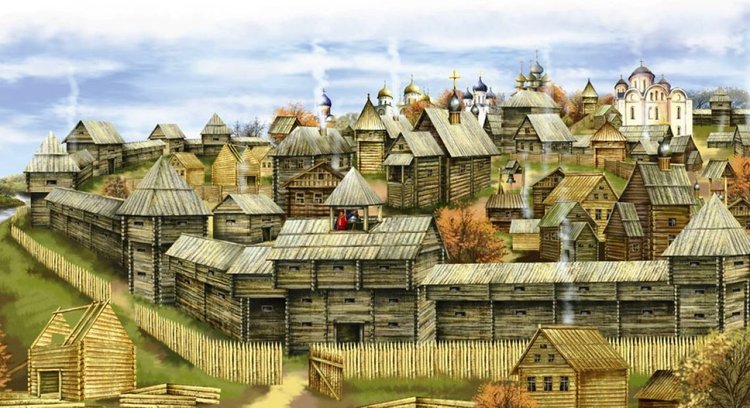 The city of Kiev (Kyiv) in Ukraine has seen much warfare in its long history and has borne witness to many sad events. This post will focus on one of those events – the Siege of Kiev in AD 968 – which plays a major role in the opening scenes of my novel, Sigurd’s Swords.