I am happy to announce that my third novel, War King, has just released in audiobook format.

As with the first two novels, War King audiobook was published by Tantor Media and narrated by Shaun Grindell, an accomplished actor from Southampton, England, who trained at the Calland School of Speech and Drama and the Lee Strasberg Actors Institute in London.

WIN A COPY
I have five (5) digital copies of War King (audiobook) to give away. To enter for a chance to win, just fill out the form here and type “War King Audiobook” in the message field. Five winners will be randomly selected and notified on April 15, 2019.

Can’t wait for April 15? Grab a copy at one of these locations:

Twenty summers before, Hakon Haraldsson wrested Norway’s throne from his murderous brother, Erik Bloodaxe, but he failed to rid himself of Erik’s family. Now, the sons of Erik have come to reclaim Erik’s realm and avenge the wrong done to their father and their kin.

They do not come alone. With them marches an army of sword-Danes sent by the Danish King Harald Bluetooth, whose desire to expand his realm is as powerful as the lust for vengeance that pulses in the veins of Erik’s brood.

Like storm-driven waves, the opposing forces collide in War King, the action-packed sequel to God’s Hammer and Raven’s Feast. 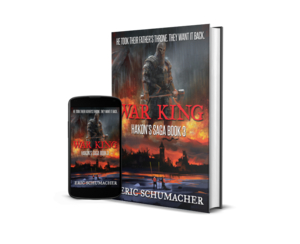 I’m excited to let you know that Raven’s Feast, the sequel to God’s Hammer and the second book in Hakon’s Saga, has launched and is now available in print and ebook formats.